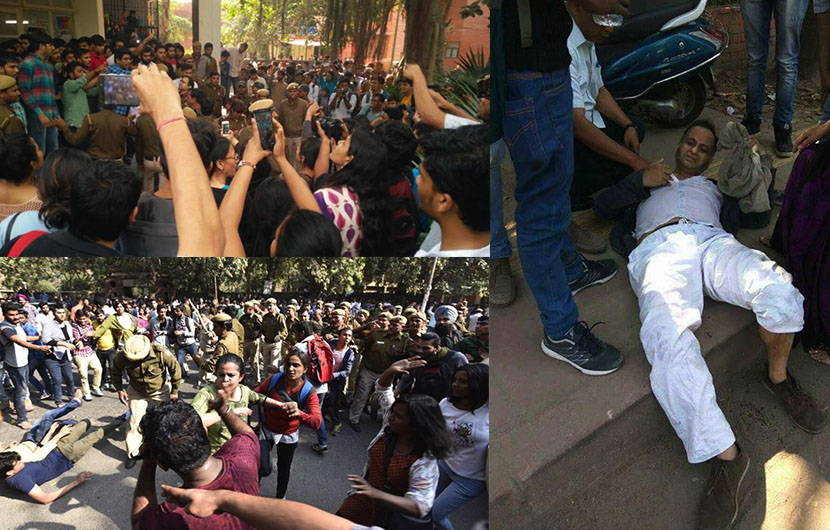 Dr. Rajender Prasad, Principal of Ramjas College, has called for discussions and requested to maintain peace

According to reports, an FIR under various IPC sections has been launched against unknown persons according to the SHO of the Maurice Nagar police station’s version, not based on complaints by AISA-backed students and teachers belonging to Delhi University Teachers Association. Here’s a round-up of the entire issue so far:

Issues between Left-backed All India Students Association (AISA) and the RSS-backed Akhil Bharatiya Vidyarthi Parishad (ABVP) began due to an invitation that was sent to JNU students Umar Khalid and Shehla Rashid, the former facing charges of sedition, to participate in a seminar on the ‘Culture of Protests’.

Around 1 PM is when the eruption started, videos have surfaced of stones that were thrown while the event was on. Students were locked inside the college allegedly by ABVP activists for hours.

Due to ABVP’s resorting to violence, authorities had withdrawn the invitation to Khalid and Rashid which angered some of the students and teachers following which a march to Maurice Nagar police station was planned for today – demanding action against vandalism.

According to Rashid, former JNU Students’ Union vice president, no one from ABVP was detained and after they had disrupted the seminar, ABVP went on to abuse and beat students and journalists – including females.

She further alleged that the police too had “joined the ABVP goons” in attacking her. In addition to students, teachers of other colleges were also attacked and injured and were taken to hospital.

Dr. Rajender Prasad, Principal of Ramjas College, has called for a discussion from both parties – including the event organisers – requesting both to do so amicably and maintain peace and harmony in the college.