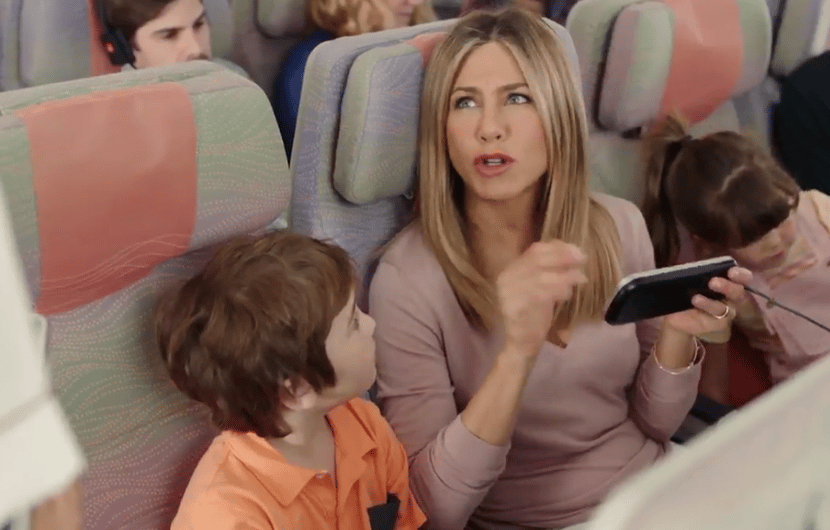 "This thing has so many games and so many movies… It’s crazy," Aniston says.

Within hours of the security ban announced by the US government from Muslim-majority countries, Emirates released a video starring Hollywood actress Jennifer Aniston in response to the laptop ban.

The commercial starts with on-screen text that reads “Who needs tablets and laptops anyway?” and goes on to show Aniston sitting between two children explaining to them the host of inflight entertainment options Emirates offer – so that passengers need not get bored.

Aniston says, “This thing has so many games and so many movies… It’s crazy.”

The United States government had announced that it would bar passengers from carrying any devices bigger than the usual smartphone – including laptops, iPads or Tablets and Kindles. The ban is enforced on all non-stop flights originating from Dubai, Abu Dhabi along with several other Muslim-majority countries in the Middle East and Africa. The United Kingdom had also followed suit and imposed the same on 14 airlines, namely British Airways, EasyJet, Jet2.com, Monarch, Thomas Cook, Thomson, Turkish Airlines, Pegasus Airways, Atlas-Global Airlines, Middle East Airlines, Egyptair, Royal Jordanian, Tunis Air and Saudia.

Let us entertain you. pic.twitter.com/FKqayqUdQ7