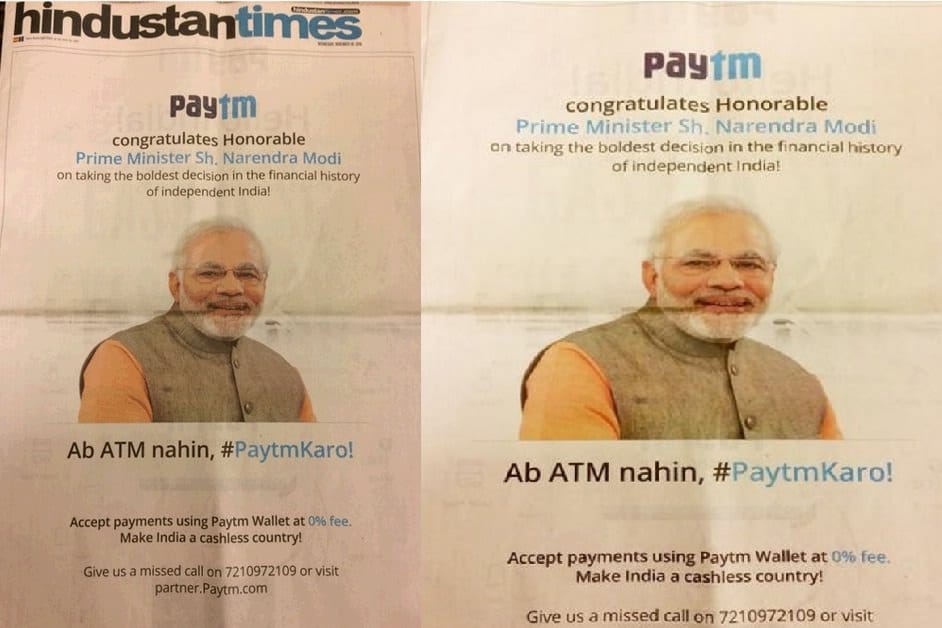 Paytm in a recent announcement declared that it has touched a record of 5 million transactions a day and is on its way to process Rs. 24,000Crores. This is not just a record for Paytm but for the segment as a whole as it is supposedly more than any other payment network in India.

The Online-to-Offline (O2O) payment solution which was launched about a year ago by Paytm has seen exponential growth and is backed by a large ecosystem of customers and merchants. Paytm is hailed as the leader in the mobile payment and commerce segment with ‘hundreds of thousands’ of outlets across several categories. Focusing assertively on mobile payments, they are moving closer and closer towards its aim of cashless transactions being the norm in India.

The night of the announcement, several reports, images and videos were made on how people flooded ATMs and rushed to petrol pumps and other places that were still accepting the otherwise scrapped notes – mostly panicking over what should and could be done.

The demonetisation of Rs. 500 and Rs. 1000 notes, announced by Prime Minister Narendra Modi on November 8, can be argued to be tailor-made for PayTM and its segment, in general. Not to forget the rocket speed at which after a late night Modi announcement PayTM was able to put a full page advertisement in all leading newspaper dailies.

Calling it an indication of how fast consumers across the country are adopting to the safety and convenience of cashless payments, Paytm announced that within a few hours of Modi’s announcement last Tuesday night, they saw a 435% increase in overall traffic. The company reported a hike in app downloads of 200% and a surge of 250% in transaction value and overall transactions. They also noted a growth of an overwhelming 1000% in money added to the ‘wallet’ and an increase in offline payment transaction value of 400%.

Paytm, further, has left no stones unturned in making the most of the situation. They managed to place a front page advertorial, lauding the Prime Minister’s move, flush with his image covering almost the entire page – which, however, was not the first time a private sector service provider featured PM Modi’s picture in its ad. They have also launched new features and made several other announcements over the last few days.

Taking note of what the CM said, Vijay Shekhar, Paytm CEO and Founder replied with a tweet saying, “Dear Sir, The biggest beneficiary is our country. We are just a tech startup, trying to solve financial inclusion & make India proud.”

Dear Sir, The biggest beneficiary is our country. We are just a tech startup, trying to solve financial inclusion & make India proud. #?? https://t.co/3rI8r6W0EZ

However, Kejriwal is not the only one who’s questions need answering, there seem to be many more queries that are in need of answers. According to an article in The Quint, the photograph of the new Rs.2,000 rupee note, which was circulating on Whatsapp, etc. was the most visible signal in a steady trickle of news, leaks, market intelligence and rumours – according to businesspeople, economists, and tax experts.

The report goes on to say that the image was confined to very wealthy and politically connected businessmen and their friends, initially. It further goes on to the question, “How did photographs of the new Rs 2,000 notes, printed in such secrecy, leak into the public domain? And if businessmen knew that the new notes were printed and ready for dispatch, what else did they know?”