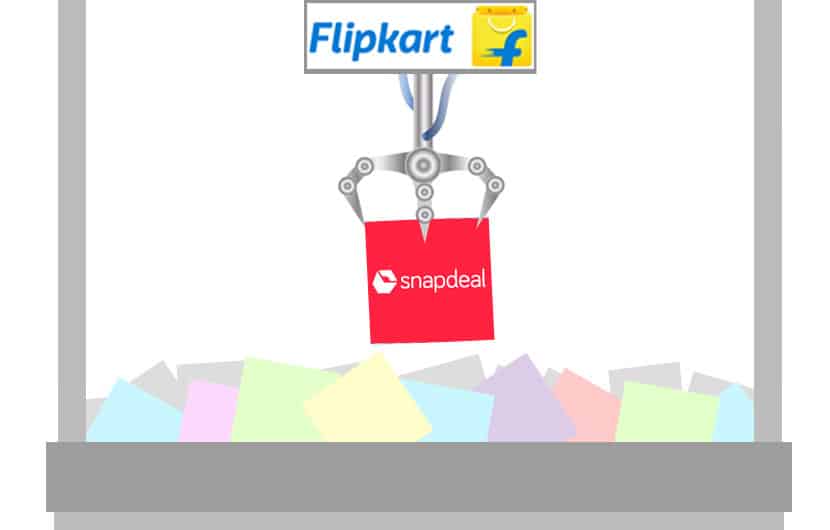 If the post-merger acquisition goes well, Flipkart could get significant funding and capability firepower to fend off Amazon

The Indian e-commerce sector has faced a trying year with slow demand growth and regulatory challenges. Experts believe that the Q4 FY17 (Jan-Mar) reached USD 14.7 billion which is just a 5% increase compared to Q4 FY16’s USD 14 billion. One of the worst affected companies of the slowdown is Snapdeal, leading to several reports of a consolidation – wherein Flipkart acquires Snapdeal – is being spoken about.

While the implications two of the biggest Indian names in e-commerce coming together is being cautiously anticipated, here’s a low-down on the pros and cons for when Flipkart acquires Snapdeal:

If and when acquired, Flipkart will have access to Snapdeal’s numerous warehouses and the overall supply chain. This could boost their logistics segment significantly and reduce their supply chain costs while increasing customer satisfaction. This would also help in their competition with Amazon in gaining supply chain leadership – which is something Amazon is expanding aggressively.


Flipkart could also get additional investments from Softbank which would increase their capital firepower and push the battle with Amazon more. While both Snapdeal and Flipkart customers may largely overlap, there are some Snapdeal customers that Flipkart could inherit. Another fruitful inheritance of that Flipkart would be pleased to receive is the exclusive tie-ups that Snapdeal had. They could take advantage of these global and home-based brands to expand their home and fashion categories portfolio.

According to Bangalore-based research and advisory consulting firm, RedSeer, Flipkart could face challenges in extracting synergies and value from this acquisition when one considers the physical distances along with the different cultures between the two teams.


However, Anil Kumar, CEO, RedSeer Consulting adds, “If the post-merger integration is executed successfully, the deal could play out similar to Ola/TFS acquisition in online cabs space, which gave Ola significant funding and capability firepower to hold off Uber in India. Something which would help Flipkart fend off Amazon for much longer.”

On the other hand, in addition to laying-off about 60% of its workforce, giving up office space and shutting down subsidiaries – like Shopo – Snapdeal was also recently involved in a legal issue with organisers of the Bangalore Fashion Week (BFW) for which the founders have been summoned to court.  While a company spokesperson for Snapdeal said that they will take all appropriate legal steps to defend it and its employees against all “baseless allegations” and are “Yet to see the complaint filed against it.”


Speaking on the impact this could have on the Snapdeal-Flipkart acquisition, Mrigank Gutgutia, Engagement Manager at Redseer consulting points to the strong interest the investors have been showing in pushing the deal through. He adds, “We are not sure how the exact dynamics of this will play out and how much hassle this issue is going to cause, we feel that overall it should be something which the investors and the companies are able to resolve.”